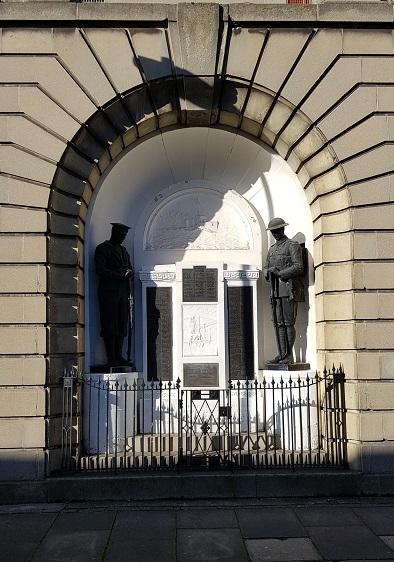 After the end of the First World War, Sir GB Hunter of Swan Hunter and Wigham Richardson Ltd (more locally known as ‘Swans Shipyard’) commissioned the building of the Wallsend Memorial Hall at a cost of £25,000.

It was intended as a centre for social, cultural and recreational activity and was dedicated to their workers who fell during the First World War, for whom there is a beautiful memorial built into an external alcove containing life-sized bronze figures of a soldier and sailor with bowed heads. Above, in the head of the arch, there is a cast iron relief of a ship in the mouth of the River Tyne, and in the centre a cast iron depiction of a worker operating a machine.

When it was first opened, the building contained a “lavish” ballroom on the first-floor (still a centrepiece of the building) which could accommodate an audience of 1,200 or 400, as well as retiring and meeting rooms, and a large kitchen.

In 1926 two halls on the ground floor were added, one to be used as a badminton court and for general purposes, and the second to used for recreation and rest for residents (on payment of a small fee).

The building quickly became a focal centre for many activities in Wallsend, winning the hearts of its residents.  It is still known locally as 'The Mem'.

The original roof of The Mem was a stunning, fully glazed arched construct, but unfortunately had to be boarded over in c1941 to protect it from enemy bombing. After the Second World War the names of the Fallen were added to the war memorial.

On opening, a charity was set up to run the premises for the benefit of the people of Wallsend, with the trustees drawn from local people and organisations. The original charity remains in existence today and the building continues to provide access to social, educational and cultural opportunities for the people of Wallsend. The hall has Sting (Gordon Sumner) as its Cultural Patron.

In the 1950s The Mem was allegedly the venue for the first rock and roll dances in the region. It now hosts a variety of functions and events, as well as a café and serviced offices for local community groups and businesses.

My first dance in The Mem was in about 1963. I met the man who became my husband Stan Young. He died shortly after our 49th Wedding Anniversary. Will never forget that night. - Ros Young